What’s the Difference Between Running and Jogging? 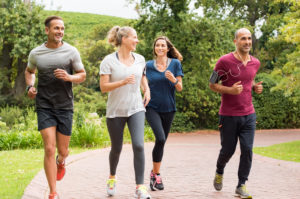 Do you head outdoors and pound your heels against the pavement to get a workout? You’re in good company! You might describe what you’re doing as running or you might call it jogging. People sometimes use these words interchangeably without understanding what they mean and how they differ. In general, running is more intense than jogging. Jogging, for a fit person, is a somewhat relaxing activity that affords the chance to get outdoors and breathe in fresh air while burning calories and getting cardiovascular benefits. In other words, jogging is a bit “lower key” than running. But there are other differences. Let’s see what distinguishes running from jogging.

Is there a set speed you have to attain to switch from jogging to running? Although there isn’t a standard definition of what constitutes running, most sources say you’re running if you reach a speed of at least six miles per hour. Jogging corresponds to a slower speed of five miles per hour or less. If you run at six miles per hour, you’re running a 10-minute mile. Depending upon your fitness level, this can be a rather leisurely pace or a somewhat challenging one. Both will give you a decent workout.

Running vs. Jogging: Do the Health and Fitness Benefits Differ?

Both jogging and running burn calories, but running burns more calories per minute than jogging. That’s because you expend more energy for each minute you exercise when you pick up the pace. Running and jogging are also high-impact exercises that help preserve bone density. High impact exercise is movement where both feet leave the ground at the same time. Jogging and running are better for preserving bone than walking since walking involves less impact on the bones.

To burn the same number of calories, you have to jog longer than if you run. So, if you’re trying to get leaner, running is a better choice. The disadvantage of jogging is doing it frequently or for longer periods of time can lead to repetitive stress injuries, including Achilles tendonitis, inflammation of the tendons in the lower legs. These issues are a common problem for joggers and runners, especially those that put in too many miles. Picking up the pace by running offers some advantages, as you can get similar calorie-burning benefits in a shorter period of time.

One way to get the benefits of running, if don’t want to run for sustained periods is to do an interval running workout. Interval training is where you exercise at a high intensity, like running, for a specified period of time and then recover by doing a low-intensity movement for a set time period. For example, you might run for 30 seconds and walk or do a light jog for 30 seconds to recover. Then, keep repeating this structure for the length of your workout.

If you pick up the intensity during the active intervals, you can get the cardiovascular and calorie-burning benefits of a 40-minute jog in as little as 20 minutes with interval running. The high-intensity nature of running for short periods taps into anaerobic energy pathways that cause your body to burn more calories once your workout is over. The after-burn effect, as it is called, is a well-described phenomenon. Your body becomes overheated and energy is depleted during the running intervals. Due to the extra stress running places on every system in your body, it has to expend more calories for hours after a running session is over to recover. You don’t get the same degree of after-burn after jogging.

Both Running and Jogging Have Health and Fitness Benefits

Both running and jogging can positively impact your cardiovascular health by lowering blood pressure and by having a favorable impact on blood lipids. Some studies show regular running or jogging raise HDL-cholesterol, the form of cholesterol linked with a lower risk of cardiovascular disease. But you’ll improve your aerobic fitness faster and to a greater degree if you pick up the pace. That’s where interval running comes in. You get the benefits that running offers without having to sustain it.

Jogging has benefits too. A gentle jog outdoors is an excellent stress reliever. Studies show running and jogging boost the release of feel-good chemicals called endorphins. It’s these chemicals may be responsible for the well-known runner’s high. Why not do both? Twice a week, do high-intensity interval running, but reserve a day or two each week for a relaxing jog You’ll get the best of both worlds!

Time Health. “Is Running Bad for Your Knees?”