How Does Fat or Fiber Affect the Absorption of Sugar? 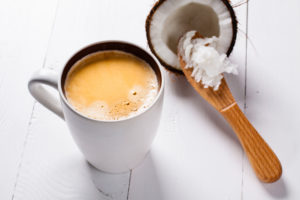 Most people who are trying to be healthy know that a meal of high sugar foods or processed foods is going to be a disaster for blood sugar levels. Many people don’t eat a meal like this.

Often what is eaten is a meal that is a combination of protein, fat and carbohydrates. However, what science has taught us is that the composition of your meal can definitely affect the absorption of sugar.

Two of the most effective ways to delay the absorption of sugar from a meal are to have just enough but not too much fat in a meal, and enough fiber in a meal.

When sugar is absorbed from food in a meal, the first thing that happens is that the sugar molecules are broken down by enzymes in the gut. The smaller sugar particles then enter into the bloodstream, raising the blood sugar levels. If the blood sugar level goes too high, then insulin will be released in super high amounts. This starts a whole cascade of events that end up in diabetes.

When blood sugar levels are high, the excess sugar has to go somewhere. It ends up getting deposited in the organs. When it deposits itself in the eyes, the result is cataracts. When it deposits itself in the nerves of the body, a condition called peripheral neuropathy occurs. This is where the nerves are irritated and start giving symptoms such as numbness, pain, tingling sensations, and hot and cold sensations.

The excess sugar levels make organs dysfunctional. This is one reason why diabetics – those with high blood sugar levels – have so many health problems later in life with cataracts, peripheral neuropathy, heart disease, blood vessel disease, immunity, wound healing and other degenerative conditions.

Fat and fiber can delay the process of the sugar molecules entering into the bloodstream but it’s not all types of fat and fiber that give the same response.

Guidelines for Fat and Fiber to Lower Your Blood Sugar Levels

Below are six guidelines that will help you make the right decisions about fat and fiber in your meals to delay sugar absorption.

1. Eat just enough fat but not too much in a meal.

2.Fat delays hunger. Fat delays the rise of blood sugar levels. It does this by keeping the food in the stomach for a longer period of time so that sugar is released more slowly into the bloodstream. But what if there’s too much fat in a meal?

One study at Georgia State University in 2015 found that when there was an excess of fat and sugar in a meal, there was a release of epinephrine that made the blood sugar levels rise even higher when the animals already had obesity or liver problems such as a fatty liver. It caused insulin resistance and converted the body over to the biochemical pathways that are related to stress, not healing. It also caused weight gain and increased blood sugar levels.

This study teaches us the importance of not ‘pigging out’ on fatty foods whenever we are pre-diabetic or diabetic. Fatty foods such as ice cream, fatty meats, fatty desserts, high fat dairy products and nuts and seeds can look exceptionally inviting at parties and barbecues.

The best thing to do when faced with a situation like this may be to ask yourself, “Can I take another physical hit from eating these foods right now? If I eat a high fat meal, it will cause the stress hormone epinephrine to be released, and insulin resistance will happen. My blood sugar level will rise and be stubborn about coming back down. Is it worth it to eat these foods now and feel bad later for hours or even days?”

Most often the answer will be NO. I won’t do it.

Another animal study showed that a high fat diet – where the calories from fat was 58% – showed that after the first week, the animals had already gained weight and their metabolic efficiency was lower. Their blood sugar levels increased after one week on the high fat diet and stayed high for one year. Their insulin levels increased progressively over time and their bodies could not show a proper insulin response to the high blood sugar level after one week of fatty diet eating. The diet caused early type 2 diabetes.

These Swedish scientists confirmed that eating a high amount of fat in the meal could actually cause diabetes! It screws up the body’s response to sugar.
The lesson here is to spend some time learning what foods are high in fat and mentally counting the fat grams in a meal so you don’t end up causing your own diabetes.

One teaspoon of fat gives you 45 calories. Thus, if you are on a 1200-calorie diet, you generally don’t want the fat in your diet to be greater than about 25%. Twenty-five percent of the 1200 calories would equal 300 calories, which is only about 6-1/2 teaspoons or a little over 2 tablespoons of fat FOR THE WHOLE DAY. In studies, a low fat diet means one teaspoon fat per meal.

More than this could easily put you into the category of a high fat diet – which can cause diabetes. A high fat diet would be 540 calories of the 1200 calories from fat. This is equivalent to 4 tablespoons fat per day.

Scientists in one study found that a high fat breakfast can adversely affect blood sugar levels for up to six hours later.

This means they can cause insulin resistance – and your blood sugar levels will stay high. They won’t come down and will be stubborn to do so over time.

Thus, here you have a negative effect of fat on the blood sugar levels. The moral of the story here is to stay away from these unhealthy types of fat. They just aren’t worth the health battles you will have to fight in the future.

In one study, scientists asked patients to consume either olive oil or butter and then exercise after a meal. They then watched their blood sugar levels.

What do you think happened?

There are a lot of people now that understand that taking a tablespoon of MCT oil helps them lose belly fat. That’s a good thing. The MCT oil is helpful for those who have insulin resistance and obesity from eating a high fat diet. The MCT oil caused a lower rise in blood sugar levels after eating.

When Australian scientists first released their chart of carbohydrate foods and rated them according to how much each one of them raised the blood sugar levels, it shocked the world. Supposedly good foods like whole wheat, a baked potato, jasmine rice and even granola bars and protein bars had high glycemic indexes – and this meant trouble for anyone who was having blood sugar levels higher than normal.

For example, in the 1980s, scientists found that the addition of fat delayed the absorption of sugar when meals containing rice and apples were eaten but not so much potatoes. The glycemic index of potatoes is much higher than rice or apples (98 in a potato, 60 in rice and 40 in apples). The blood sugar levels didn’t go as high when there was fat in the meal.

6. Know the high fiber foods and incorporate them into your diet.

Australian researchers are the best at testing foods for glycemic index. They tie the results to blood sugar levels and sometimes look at other factors about the food to see how the food affects the body.

It was high protein high fiber snack bars that worked the best. They reduced the amount of food that the women in the study ate and improved their blood sugar levels by 16% and improved insulin levels. The women ate the snack bars at mid-morning and at mid-afternoon.

What makes a snack bar high protein high fiber? It would have to have a minimum of 10 grams protein and 5+ grams fiber. This 5+ grams fiber would be equal to what you get in a serving of Metamucil or other fiber that is added to drinks.

Sometimes people ask if you eat a donut but take Metamucil, is it a way to prevent the sugar spike and release of insulin. This is entirely possible and even probable if you are eating enough fiber – but to make it more effective, you could also take a capsule of a blood sugar lowering herb such as bitter melon, Gymnema, goldenseal, or banaba.

7. Understand a little bit about how different types of fibers affect blood sugar from the studies.

There’s no doubt that soluble dietary fiber affects the emptying of food from the stomach into the rest of the GI tract as well as blood sugar levels and insulin response in patients with type 2 diabetes. It improves this. Soluble fiber is found in foods such as chickpeas, oat bran, barley, beans, nuts and seeds.

Insoluble fiber foods include whole wheat, whole grains, and vegetables containing a lot of fiber that cannot be broken down in the GI tract such as celery, asparagus, and green beans.

Generally speaking, diets containing up to 15 grams soluble fiber per day are capable of reducing blood sugar levels by about 10 mg/dL. The same ting is true for high fiber diets up to 42.5 grams fiber per day.

In a Canadian study, adding legumes to the diet of 121 patients with type 2 diabetes (1 cup per day) for three months lowered hemoglobin A1c levels of the patients more than those who added whole wheat products to their diet. The difference between these two foods is that legumes are higher in fiber than whole wheat and legumes are low glycemic index while whole wheat is a high glycemic index food.

Beans and lentils have been eaten since the beginning of time. They provide protein and fiber, and iron, zinc, folate, magnesium and other vitamins and minerals as well as plant chemicals that improve your health. For example, they offer anti-cancer and anti-inflammation and antioxidant properties. They are a healthy way to improve your health – and blood sugar levels.

What’s the lesson here? It’s to eat legumes when you can in a meal to control your blood sugar levels.

There’s a lot you can do to start impacting your own blood sugar levels! Try some of these suggestions today!

Clark, I.L., et al. Rebelling against the (insulin) resistance: a review of the proposed insulin-sensitizing actions of soybeans, chickpeas and their bioactive compounds. Nutrients 2018 Mar 30;10(4).