7 Simple Ways to Reduce Your Risk For Type 2 Diabetes 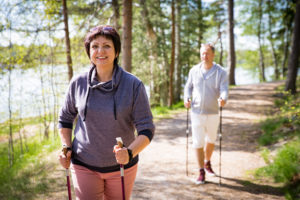 According to the Centers for Disease Control and Prevention, 37 percent of US adults have prediabetes.  This condition is associated with obesity and characterized by insulin resistance and elevated blood sugar levels.  Weight loss and increased physical activity can often prevent prediabetes from developing into type 2 diabetes.  Here are a few more lifestyle changes that can help to reverse prediabetes and return blood sugar levels to their normal range.

Have an extra cup of coffee

Drinking an extra cup of coffee every day could lower your risk for type 2 diabetes.  Researchers at the Harvard School of Public Health analyzed data from three large studies involving 123,733 men and women.  Participants filled out food-frequency questionnaires every four years.  The data revealed that participants who increased their coffee consumption by more than one cup per day over a four-year period had an 11 percent lower risk of developing diabetes in the following four years.  Those who decreased their coffee intake by one or more cups raised their risk by 17 percent.

Get a good night’s sleep

Sleep deprivation causes insulin resistance in body fat, increasing the risk of type 2 diabetes.  A study published in the Annals of Internal Medicine investigated the link between sleep and blood sugar metabolism.  Healthy young adults spent eight days and nights in a sleep lab. Their diet and calorie intake were strictly controlled and fat samples were collected each day.  Sleep was restricted to 4.5 hours on four of the nights.  Lack of sleep caused participants’ fat cells to become 30 percent less sensitive to insulin, dropping to levels typically seen in people with diabetes.

Taking a 15-minute walk half an hour after eating can help to control your blood sugar levels.  In a study published in Diabetes Care, researchers tested the effects of walking on overweight, prediabetic volunteers.  On different days the participants either did no physical activity, walked at a moderate pace for 15 minutes after each meal, or took one 45-minute walk.  Their blood sugar levels were continuously monitored.  Walking after eating blunted the rise in post-meal blood sugar and helped to keep it steady for three or more hours.  Muscle contractions associated with exercise aid in clearing sugar from the blood.

Frequenting fast-food chains could cause you to gain weight and become insulin resistant, two major risk factors for type 2 diabetes.  A study funded by the National Heart, Lung, and Blood Institute looked at the effects of fast food on the health of young adults.  The 3,031 participants, who were between the ages of 18 and 30 at the start of the study, were given dietary assessments over a period of 15 years.  By early middle age, those who ate fast food more than twice a week gained an average of 10 more pounds and developed double the rate of insulin resistance than those who treated themselves less than once a week.  A single fast-food meal can contain a whole day’s calorie requirement.

Start your meal with a vinaigrette salad

Vinegar reduces the blood sugar rise following a high-carbohydrate meal.  In an Arizona State University study, participants with were given an orange juice and bagel breakfast, high in sugar and starch. Before the meal, half received a drink containing 20 grams of vinegar and half received a placebo. Vinegar consumption caused blood sugar levels after the meal to drop by 34 percent in people with prediabetes and by 19 percent in people with type 2 diabetes.  It also slowed the rise of blood sugar in a healthy control group.  The acetic acid in vinegar interferes with carbohydrate digestion by deactivating starch-digesting enzymes.

Chronic stress raises blood sugar levels.  Researchers at Duke University Medical Center found that stress management techniques can lower them.  In the study, 108 patients with type 2 diabetes participated in five 30-minute diabetes education sessions.  Half of the patients were randomly enrolled in sessions that included instruction in stress management.  Training included breathing techniques, mental imagery and progressive muscle relaxation.  After six months, the blood glucose levels of the stress management group had improved while those of the control group had deteriorated.  The effect of the stress-lowering techniques was comparable to that of some diabetes drugs.

Eating more green leafy vegetables could reduce your risk for type 2 diabetes.  Vegetables like spinach, broccoli or kale are high in vitamins, minerals, fiber and antioxidants, but low in carbohydrates.  They help to keep blood sugar stable, unlike sweet fruits and starchy root vegetables.  A meta-analysis published in the British Medical Journal reviewed six studies on links between the consumption of fruits and vegetables and type 2 diabetes.  The data, which covered more than 200,000 people in three countries, revealed that eating an extra serving of leafy greens each day reduced the risk of developing diabetes by 14 percent.

Risk factors for type 2 diabetes include being overweight, storing fat primarily in your abdomen, having a sedentary lifestyle, having a diabetic family member and being over the age of 45.  Because type 2 diabetes is so common, it’s important to have your blood sugar levels tested every three years.  A diagnosis of prediabetes can motivate you to take the necessary steps to keep your blood sugar under control and prevent full-blown diabetes from developing.