Caffeine and Exercise: Should You Have a Cup of Coffee Before a Workout? 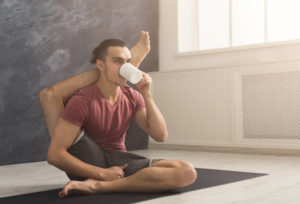 A cup of coffee in the morning is a daily ritual for many. Starbucks lovers raise your hands! The benefits extend beyond enjoying the taste of a hot cup of Java. Caffeine is a stimulant that increases alertness. Therefore, it is not surprising that it might be beneficial for exercise performance. Most research suggests that it can give exercise performance a boost, but the benefits are greatest for certain types of exercise.

First, caffeine boosts alertness by blocking adenosine receptors in the brain. Adenosine is a chemical that has a relaxing effect on the body. Blocking these receptors reduces the relaxation response and increases alertness. Caffeine also has a mood-elevating effect and some people feel more creative after they drink it. How many good ideas have been dreamed up over a cup of coffee?

But what about exercise performance? Caffeine has the biggest benefits for endurance exercise, exercise where you work out at a moderate pace for long periods of time. If you jog, walk, or cycle, caffeine may give your workout a boost and improve how you perform. It also appears to reduce the sensation of how hard you’re working. An endurance workout feels easier when you have caffeine on board. Therefore, you may sustain your work a little longer and, potentially, get more benefits.

It doesn’t take a lot of caffeine to get benefits either. Research shows as little as 3 milligrams of caffeine per kilogram of body weight boosts exercise performance. That’s the equivalent of two cups of coffee for a person of average weight,  an amount of coffee most people can comfortably drink. However, in studies, researchers typically use a caffeine supplement to standardize the dose.

What about High-Intensity Exercise?

One downside of drinking coffee to improve exercise performance is the benefits may be reduced if you’re a regular consumer of caffeine. Some research suggests that athletes who regularly drink caffeinated coffee are tolerant to the exercise-enhancing effects. However, some studies suggest that caffeine enhances performance even in people who regularly use caffeine.

Why Does Caffeine Improve Exercise Performance?

Caffeine may boost exercise performance in several ways. One theory is caffeinated beverages have an impact on energy usage during exercise. Caffeine increases the breakdown of fatty acids and makes them more available as a fuel source. This preserves glycogen, thereby increasing energy reserves. More glycogen means that you can maintain exercise longer without exhaustion. However, some studies suggest this isn’t the primary mechanism. In fact, the exact mechanism is still unclear.

Another Benefit of Caffeine Before Exercise

Research also shows that caffeine consumption reduces delayed onset muscle soreness, the achy, stiff muscles you get 24 to 48 hours after a workout your body isn’t accustomed to. In one small study, men who consumed caffeine (5 milligrams of caffeine per kilogram of body weight) an hour before a biceps workout experienced less delayed onset muscle soreness. The muscle pain and stiffness was significantly reduced on days 2 and 3 relative to those who consumed a placebo. They were also able to complete more repetitions of biceps curls with caffeine on board.

Caffeine really can boost exercise performance for moderate-intensity, sub-maximal exercise and, possibly, high-intensity exercise. It may also help reduce the severity of delayed onset muscle soreness for those training sessions where you push your body harder than its accustomed to. If you’re a healthy coffee lover who tolerates caffeine well, there’s no reason not to have a few cups of coffee before a workout.

Institute for Scientific Information on Coffee. “Coffee and Health”