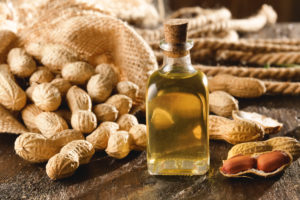 Is peanut oil fattening and will make you tip the scale? Even if they have amazing health benefits,  oils are very fatty and carries a lot of calories. Peanut oil, otherwise known as “groundnut” or “arachis” oil is one of the most widely used oils in the world. And like all fat, over indulging can cause weight gain

Peanut oils is a derative peanut kernels that are pressed and commonly used in Asian cuisines, especially in the Southeast Asian countries. This has also become quite popular in the western world.

The best form of peanut oil is probably that which is cold-pressed, unrefined, with a deep yellow hue, and a very nutty aroma. But if allergies to peanut is a concern, the refined peanut oil would be the better choice, because it is known to be allergen-free. In places where it is often used, the less refined version is more popular. Possibly, since it can retain a bit more of the protein of the peanut, producing in effect a stronger peanut flavor.

The product is subjected generally to standard extraction procedures. In certain instances, though, the oil undergoes hydrogenation, meaning, it employs high temperatures to spontaneously make the oil more “saturated.”

Frying and cooking– in the west, this is often used for frying chicken, turkey, or french fries

Soaps and detergents– a specialty use of this oil are in soap and detergents, with its characteristic long-lasting lather. But since the oil is highly unsaturated(healthier than saturated fats), it is prone to rancidity or getting spoiled.

Lubricant– regarded as an excellent, non-dryingemollient or skin conditioning oil, shown to have similar properties to castor and olive oils

Face and shaving creams, hair lotions- the cosmetics industries use this oil to form the base of beauty products

This oil is used for a variety of other applications, including:

In terms of its fatty acid composition, which is considered the main factor determining the performance and usage of all oils, peanut oil is roughly at the middle of the scale, in comparison with the highly saturated (e.g., palm kernel, coconut) and the highly polyunsaturated (e.g., safflowerseed).

In addition, peanut oil is known for the following essential characteristics:

Good level of tocopherols– these constitute vitamin E, which is a natural anti-oxidant, which removes potentially damaging agents in our bodies

High proportions of unsaturated fatty acids-specifically, these include oleic and linoleic acids

No trans fats – major US brands that use peanut oils (as in peanut butter) were checked for the presence of trans-fatty acids. It is good news that no trans fats were found in any of the samples examined using what is called an analytical system.

This all-purpose oil is known for its mild but flavorful taste, distinctive nutty aroma, with the characteristic taste of its parent legume. Its crude form commonly has the popular nut-like aroma; but after being refined, the oil becomes odorless.

Relatively, it has a high smoke point of about 446 F, making it a perfect choice for high-temperature cooking, such as deep-fat frying. Its high heat tolerance and smoke point also make it suitable for sautéing.

Protect the skin from blackheads and acne marks– when used as a carrier oil mixed with fresh lime juice, this oil works wonders to the skin

Therapeutic massage oil- the oil is believed to have energizing effects when used on the skin as a massage oil. Evidence shows it is therapeutic in people afflicted with arthritis and polio.

What’s the best way to use the oil

It is best used for stir-fry cooking, sauteing, wok cooking, and frying (e.g., deep-frying or pan-frying).

Peanut oil is regarded as one of the healthiest oils, safe for daily use, because of its high polyunsaturated and monounsaturated fat components. Generally, it is considered superior to other oils such as soybean, corn, cottonseed, safflower, or olive for making salad dressings. These refer to the type of salad dressings that are stored at very low temperatures. Although, some critics are still concerned about its heaviness or saturation, and claim that it may not be as healthy compared with “lighter” oils such as that in the sunflower seed.