Worst and Best Oils For Frying Your Favorite Foods 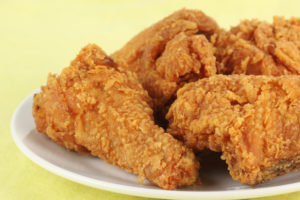 There are so many different kinds of cooking oils with various benefits and drawbacks. No two oils are exactly the same. Each one is suited for specific recipes, and some are even best for cosmetic purposes. Therefore, before selecting a cooking oil, you should be aware of the properties of the oil that you are using.

The best frying oil isn’t necessarily the best oil for baking. There are a few particular factors that makes one stand out above the rest. If you are not familiar with these factors, you can ruin your meal, along with health. Fried foods don’t have to be bad for you. It all depends on how they are prepared, and how much you consume,  and a major factor  is the type of oil that is used. Here are a couple of characteristics to look out for when choosing your oil for frying.

The smoke point is crucial when choosing an oil to fry with. The smoke point is the temperature that the oil breaks down at. At that point, the oil will begin to produce toxic properties that you should not consume. This is because the oil is becoming more oxidized. When an oil has a higher smoke point, the food cooks more quickly and absorbs less of the oil. This is much better for your health. When frying foods, the temperature usually is between 350 to 375-degrees Fahrenheit. The oil that you use needs to have a smoke point that is higher than this. If you fry with an oil that has a low smoke point, you will also lose most of the nutrients that the oil has to offer. As well as kill the unique flavor of the oil. You can tell when you are overheating an oil by the fumes that will begin to rise. You will literally see your nutrients go up in smoke.

There are good fats, and there are bad fats. I am sure you’ve heard this before. Saturated fats and trans fats can raise your cholesterol. Trans fat, in particular, increase your low-density lipoprotein (bad cholesterol) and decrease your high-density lipoprotein (good cholesterol). The American Heart Association suggests that you lower your trans-fat intake to less than 7 percent of your calorie intake. Polyunsaturated and monounsaturated fats have a different effect. They are known to improve cholesterol levels. Other factors may include heart health, risk of cancer, and obesity.

Olive oil very high in monounsaturated fat and it has high resistance to the oxidation and hydrogenation that occurs when cooking in high temperatures. These are the processes that turn many oils into trans fats. Monosaturated fats don’t have this problem because they are very heat resistant. It would take several hours to get to this point with olive oil. You want to try and get extra light olive oil for the best effect. Olive oils smoke point is between 390 to 470-degrees Fahrenheit, depending on what kind is used. This is certainly not amongst the highest smoke point of oils on the market, but it is high enough to get the job done. Unfortunately, you may lose some of the flavors in olive oil when using it for frying. However, it is a small price to pay when compared to the benefits.

Similar to olive oil is avocado oil. Just like olive oil, it is very high in monounsaturated fat but does have some saturated and polyunsaturated fats in the mix. This means that it has heat resistant properties. Its smoke point is much higher than olive oil at 520-degrees Fahrenheit, which means it will hold its nutty flavor quite admirably. If you find a naturally refined avocado oil, then you are good to go. Avocado oil is rich in Oleic Acid, which is a heart-healthy fat. It helps to regulate cholesterol levels and has glutathione, which boost the immune system. It also enhances the absorption of the essential nutrients due to the presence of carotenoids. Combine these factors with its versatility, and it is easy to see why avocado oil is one of the best oils on the market, but keep in mind it is relatively expensive.

Peanut Oil also goes by the name groundnut oil. It has an underwhelming taste, which makes it suitable for a variety of dishes. It also doesn’t absorb the flavor of the foods cooked in it. This is good because you can fry several different items in it and not worry about the taste carrying over between dishes. Its smoke point is relatively high at about 440-degrees Fahrenheit. However, it is high in polyunsaturated fat. This means that it is not as heat resistant as the oils mentioned above, which makes it vulnerable to oxidation. Peanut oil boast benefits to heart health, blood flow, and cholesterol.

Palm oil mainly consists of saturated and monounsaturated fats. This means that it is very heat stable and does not experience oxidation easily. It has a high smoke point of 450-degrees Fahrenheit, which makes it excellent for various types of cooking. Like peanut oil, it has a neutral taste that isn’t overbearing. However, to be safe, I recommend finding a naturally refined palm oil. If you are concerned about the environment, it may not be the oil for you. Palm oil production is said to be very harmful to the planet. Aside from that, palm oil is beneficial in preventing cancer and boosting energy levels.

Coconut oil may be your best overall choice when frying. Studies have shown that you can fry in it for over 8 hours without oxidation. The monosaturated fat contained in it makes it very heat resistant, and it has a high smoke point at 450-degrees Fahrenheit. Coconut oil also boasts various health benefits such as a boost in good cholesterol, aiding in liver health, boosting energy, losing weight, and it is great for diabetics. However, you may need to try a few kinds to find the right fit. Coconut oil has been known to leave a bit of a coconut taste to foods cooked with it. This may be a good or bad thing, depending on whether you like coconuts.

It should be noted that lard, tallow, and ghee are also excellent to fry with. In ways, they are a better alternative to oils. However, the health value depends on how the animal was raised. Grass-fed versions of these are ideal and can make for a delicious substitute.

Canola oil does have a moderately high smoke point at 400-degrees Fahrenheit, which is high enough to fry with. However, canola oil is highly and unnaturally refined. This decreases the nutrients that are typically found in canola oil. While it is possible to find unrefined canola oil, the refined versions are the ones mainly on the market. These canola oils have been linked to a higher risk of heart disease and increased inflammation. Overall, canola oil isn’t quite as bad for frying as some of the other oils that will be mentioned in this list.

Soybean oil has a smoke point of 450-degrees Fahrenheit. Soybean oil like canola oil is highly refined and goes through the bleaching and deodorizing process, which does not make for a healthy oil. Soybean oil is high in polyunsaturated fat, which makes it prone to oxidation. This makes it a poor choice when frying. Soybean oil is a popular oil used in fast-food restaurants and has been heavily linked to obesity.

Sunflower oil is generally known as a heart-healthy oil, and it has a high smoke point at 450-degrees Fahrenheit if it is refined. However, when used for frying, many of its healthy components are neutralized. This is because it lacks stability in a frying situation. As said before this makes it easily oxidative. Unrefined sunflower oil is simply not suitable for frying with a smoke point of only 225-degrees Fahrenheit. Sunflower oil is also amongst the most carcinogenic of all the oils. So, I would be careful with this one.

Hemp seed oil has a low smoke point at 330-degrees Fahrenheit. This already makes it inefficient in frying, which requires at least 350-degrees Fahrenheit. Hemp seed oil is at its best when used as an addition to salads or yogurts and really shouldn’t be used for cooking at all. If used for frying, you will lose all of its nutritional value, and it will be prone to oxidation.

Grapeseed oil has a high smoke point at 420-degrees Fahrenheit. This would appear to make it a good oil for frying, but that isn’t the case. Grapeseed oil is high in polyunsaturated fats, which have a terrible reaction with oxygen at high heat levels. The fat forms free radicals, which are unstable atoms that cause cell damage. When using grapeseed oil, stick to baking.

Temperatures to Fry Your Favorite Foods

​Pan frying has the same effect as deep frying, besides a few minor differences. There is a bit less of the crispy texture when pan frying and this is due to less oil being used. This is a positive thing for your health, due to less oil being soaked into the food. You will need to flip the food in a pan fry, so it can cook all the way through. This isn’t necessary in deep frying because the food is fully submerged in oil. Due to this fact, pan frying requires more attention than deep frying. Overall, the temperature and oils used are exactly the same in pan and deep frying. The only difference is in the result.

When using oils for frying, it is a good idea not to reuse the oils or keep at high temperatures for too long. This will increase the chances of free radicals and trans-fat formulating by oxidation. Fast food restaurants often reuse their oils for several hours, which is one of the many reasons it is so bad for you. Frying food does not need to be overly bad for you. Although I still wouldn’t suggest eating them several times a week. This can be an excellent guide to eating good and safe at the same time.