​​ Does Strength Training Reduce the Risk of Cancer? 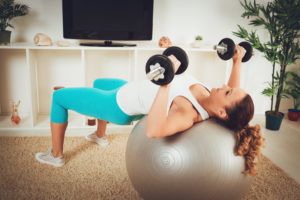 Cancer is a diagnosis we don’t want to get. Unfortunately, the odds of hearing the frightening words “you have cancer” at some point in a lifetime are relatively high. According to the American Cancer Society, a man has a 39.7 percent risk of developing cancer over a lifetime while women have a 37.6 percent risk.

Cancer is a multifaceted disease that can affect any organ and strike at any age, but the risk of developing most cancers rises as the years go by. Genetics plays a role in cancer risk, but most cancer stems from an interaction between genetics and the environment. Estimates are that at least 40 percent of cancers can be prevented through lifestyle. That’s encouraging!

One healthy lifestyle factor linked with a lower risk of some health problems, including cancer, is exercise. You might think that aerobic exercise wins the prize for being the most protective against malignancies, but a large study suggests that strength training too may lower the odds of getting a cancer diagnosis too.

What Research Shows about Exercise and Cancer Prevention

During the study, researchers looked at the lifestyle habits of over 80,000 adults past the age of 30. They quantified how much strength and aerobic exercise they did and took into account other lifestyle factors that might influence cancer risk. What did they find?

Subjects who strength trained at least two times per week had a 31 percent lower risk of dying of cancer. They also had a reduced risk of dying prematurely from any cause. Interestingly, following the World Health Organization’s guidelines for aerobic activity was not linked with a lower risk of developing a malignancy, although this doesn’t mean aerobic exercise doesn’t have benefits.

Because this was an observational study rather than a randomized, controlled trial, it only shows an association between strength training and a reduction in cancer. It doesn’t necessarily imply causation. However, other research links greater muscle strength with a reduced risk of dying of cancer as well. In addition, a study published in Mayo Clinical Proceedings found that strength training at least once per week was correlated with a lower risk of death among cancer survivors. So, exercise is beneficial for people who have had cancer too.

The mechanism by which strength training lowers cancer risk isn’t clear but there are some theories. Working muscles against resistance and increasing muscle size and mass improve how cells handle glucose. When cells can more easily take up glucose, less insulin circulates in the bloodstream. That’s a health positive! Insulin is a growth factor that stimulates cell growth, including malignant cells. One way in which strength training may reduce cancer risk is by reducing insulin-stimulated cell growth and by lowering blood sugar levels.

Another possible way strength training likely reduces cancer risk is by helping with weight control. Obesity is associated with a higher risk of at least 13 types of cancer. So, staying a healthy body weight should be part of an anti-cancer lifestyle. It’s not just total body weight that counts, it’s also body composition. You can be normal body weight and still be obese according to body fat percentage. Men who have a body fat percentage greater than 26 percent are obese while over 32 percent is the cut-off for obesity in women.

Strength training has so many health and fitness benefits. It’s through strength training that we reduce muscle loss due to aging. Inevitably, loss of muscle tissue leads to frailty and inability to get around as easily. How many seniors are in nursing homes because they lost so much muscle from inactivity and because they didn’t work their muscles against resistance?

On the positive side, research shows even people in their 80’s and 90’s can gain muscle size and strength through strength training. But, even better, start now. Do it regularly and you may lower your risk of health problems later, including your risk of developing cancer.

Remember, you don’t need a gym to build strength. You can strength train at home with little or no equipment. Bodyweight exercises build strength and muscle size and all you need is an exercise mat. Once you’ve built a baseline level of strength, you can add resistance bands, kettlebells, or dumbbells later. Just do it! But, remember, aerobic exercise is still important. Make time in your routine for that too. It doesn’t have to be prolonged. Even 20 minutes of high-intensity interval exercise is enough to offer substantial health benefits.