Is Lard Bad For Your Health? 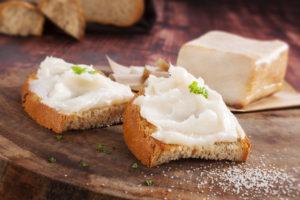 ​Lard is a fat derived from pigs. It was the preferred product used in cooking before the rise of vegetable oils. It was originally developed in order to utilize the remainder of the pig that wasn’t used as meat, usually the skin and fat. This was to keep wasted resources to a minimum. They would then use a process called rendering, which is the processing of animal products into more useful materials. It is a slow process that can take several hours and requires at least 130-degrees Fahrenheit. The hotter the temperatures, the quicker the process. This is not a process solely used to make lard. It can be done with any left-over animal products. So, what is lard used for?

What is Lard Used For

Lard is very good for frying eggs, chicken, and ducks. Certain types of lard are very good for baking as well. For example, leaf lard has little of the pork flavor in traditional lard. This makes it ideal for pie crusts and other baked goods. It is also great for sautéing vegetables. However, you should keep in mind that lard has a very low smoke point when compared to vegetable oils. Lard can also be used to make candles in combination with beeswax.

How to Make Lard

Of course, you can buy lard at the grocery store, but grocery store lard is normally very processed with plenty of added chemicals. Grocery store lard is also very high in trans-fats, which is very bad for you. Making it at home is said to be much healthier and it isn’t as difficult as you would think. The hardest part would be getting your hands on the pig fat. Unless of course, you raise your own pigs at home. Homemade lard is a good source of polyunsaturated fat and monounsaturated fat, which are the types of fat that are good for you. However, there is saturated fat located in homemade lard, but not as much as its store-bought counterpart.

​To make lard, basically, you would need to boil the fat until the oil separates from the meat bits. To do this, you are going to need to cut the bits into smaller pieces. A meat grinder can do this very efficiently if you have one. After that, it’s time to boil the pieces. You can do this on a stovetop or in a crockpot. The crockpot is a great way to do it, but it will take a bit longer. Now, you need to add a bit of water and wait for it to boil. After you start to see liquid building up in the pot, you should strain it into a jar and refrigerate it overnight. Make sure you don’t let the pieces cook too long. This will make the lard a more brownish color, which is not what you want. However, if this does happen it will not diminish the quality in any way.

–    In un-rendered pure pork fat is trimmed off the meat. It is not melted down or filtered. This form of lard has a stronger taste than the other types.

–    Pork fat is melted down, filtered, clarified, and refrigerated. The flavor is a bit milder, due to the rendering process. This lard is a little off white and has a very even texture. Most of the time it is softer than processed lard but can become hard when refrigerated as opposed to when it is room temperature.

–    Processed lard is pure white and is melted down, filtered, and clarified; just like rendered lard. This lard is rendered in a few different ways. It can be steamed in a sealed compartment, which is called Prime Steaming. It can be simmered at low temperatures. It can be kettle-rendered with a steam-jacketed kettle. Finally, it can be dry-rendered, in which the meat is chopped and heated in large vats. Then the lard is bleached and hydrogenated, then comes the preservatives. This is the most common type of lard available.

–    Leaf lard is the most premium type of lard on the market. Leaf lard doesn’t have the strong pork taste of most other kinds of lard. This makes it the perfect kind of lard to use for baking pastries. Leaf lard is made with the kidneys inside of the loin.

The biggest difference between lard and butter is that butter is a dairy product and lard is pig fat. Lard has two times the monounsaturated fat as butter and no trans-fat. This alone makes lard a healthier alternative. Trans-fat contributes to heart disease, while monounsaturated fat has a beneficial effect on your heart. It also has more vitamin D than butter. On the downside, those who don’t eat pork can’t use lard, or rather I wouldn’t recommend it. Certain oils are a healthier alternative to both, but I would say that lard is the winner between the two.

​Nutrition experts have been going back and forth about lards healthiness for years. Overall, it does have a large quantity of monounsaturated and polyunsaturated fat. It also has quite a bit of vitamin D, which is great for regulating calcium and maintenance of phosphorus levels. Both of which are valuable in maintaining bone health. Lard does need to be used in moderation, but it is good for you.

Tags: Is Lard Bad For Your HealthLard is animal fatLife Health Fitnessmonounsaturated fat has a beneficial effectsmoke point is low and not suitable for frying