What does Muscular Strength Mean? 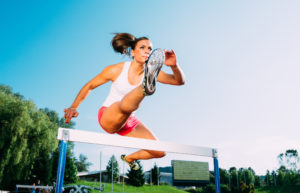 Being strong is important in any sport. Strength allows you to move heavier weights and makes movements in general feel easier. Strength protects you from injury, and one of the components of speed is being strong enough to do movements explosively and rapidly.

Simply ‘lifting weights in the gym’ without a goal will not prepare you for a competitive career in your chosen sport, however. You have to perform the right kinds of exercises to create the right kind of strength. There are seven different ‘types’ of muscular strength, and each one involves training the muscle fibers in a specific way. Let’s take a quick look at each type of strength, and how you would build it.

Agile strength involves the ability to use your muscles across multiple planes of motion and to move a mass through gravity across those planes. Traditional lifts involve pushing or pulling in single directions. Agile strength is more complex and is the kind of strength that you would use when carrying heavy objects in day to day life.

To train agile strength, you would use dumbells, sandbags or medicine balls, and work with moderate intensity. It would be dangerous to put a lot of emphasis on your 1RM, but doing multiple repetitions at 75% of your max for two to five sets would generate results.

Training starting strength requires that the athlete focus on the initial range of motion, with weights of up to 90% of 1RM. The motions are fast and explosive, and are trained for 1-6repetitions, with a large number of sets, to reflect what the athlete may do in their sport.

This is the ability to maintain contractions of your muscles and to generate force over longer periods. Triathletes and marathon runners need the ability to maintain the prolonged performance of their muscles so that they can maintain a rate of exertion that allows them to achieve good times in their races. Training for strength endurance improves the aerobic capacity of the muscles, and this type of strength is one of the more ‘functional’ types.

To train for endurance and strength, practitioners should perform slow reps at moderate intensity, using low to moderate weights, with short rest periods.

Speed strength is important for sprinters, pitchers, and other people who need to perform high-speed motions. Tennis serves are an example of this, as are shots in wrestling. Speed strength is trained using unloaded bodyweight movements and plyometrics. Where weights are used they are no more than 50% of the athlete’s one rep max. The emphasis is on doing the exercises as quickly as possible, with low rep numbers and a greater number of sets.

Relative strength is important for weight-class sports. A wrestler who is lean and strong for their body weight would likely overpower someone in the same weight class who carries more body fat and who is less capable in the weight room. Building relative strength requires building general strength and motor recruitment, and also maximizing lean mass at your body weight. This is achieved through diet changes.

Explosive power allows people to produce large amounts of force in short burst, moving quickly through the appropriate range of motion. Explosive strength is the ability to generate power quickly and with as little transition time in the contraction cycle as possible. Olympic lifters have good explosive strength, as do wrestlers.

Explosive strength involves exercising at 40 to 75% of your one rep max for a small number of reps, performed as quickly as possible, with moderate rest periods in between.

Powerlifters and strongmen focus on developing absolute or maximum strength. This is the ability to recruit a muscle or group of muscles to create as much force or tension as possible against external resistance. Sports that rely on maximum strength require people to develop neuromuscular efficiency as well as good coordination between muscle groups.

Building maximum strength requires lifting weights that are close to the 1RM of the lifter, for a low number of repetitions, with longer (up to 4 minutes) rest intervals between sets.

Most people need flexibility, balance, coordination and agility as well as strength. When it comes to strength training, they need to have more than one kind of strength. Being able to bench press a lot of weight will not help a boxer throw heavy punches if they lack strength in their core and if they have imbalances in the other muscles around the chest and pecs.

Being able to squat a lot of weight is useful but could lead to injury if the only leg and core workout being done is simple squats.

Slow, grinding compound lifts are useful but they do not generate explosive power in the same way as plyometrics or kettlebell workouts. Calisthenic training is great for rounded strength training that gives you the chance to develop supporting muscles, but it will not generate maximum strength in the way that compound lifts do. On the other hand, Olympic lifting is good for explosive power in a specific range of motion but again has its own limits.

For this reason, if you want to develop sport-specific strength it is important that you talk to a trainer that understands your sport, and work with them to build up a good programme of exercises that will improve your performance and reduce your risk of injury.