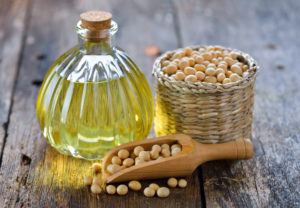 Soybean oil is one of the most popular cooking oils used in the world. Its usage dates back to 2000 B.C in Ancient China where archaeological evidence suggests that it was grown extensively for personal use and trade. Nowadays, it is used in homes and restaurants because of its low price point and versatility.

But being common does not mean that it is healthy. Could the beloved soybean oil that may very well be in your cupboard at this moment filled with the wrong kind of fat?  .

Is soy bean oil healthy or will it clog up you arteries? But before we answer that question, let’s look at where it comes from, what it can be used for and some nutritional data.

Soybean oil is derived from soybean seeds. Unlike other seed oils, these seeds are not cold-pressed in order to extract its oils. This is because it is much harder to extract oil from these seeds. Therefore, heat is applied, along with chemical solvents, bleach, and deodorizers.

Soybeans are heated and pressured then mechanically pressed. However, only a small portion of oil is expelled at this stage. A chemical solvent named hexane is added to the soybean meal to extract the majority of the oil.

Hydrogenation includes the introduction of hydrogen gas to the oil which extends its shelf life, raises its smoke point and also improves its flavor.

What is left is a light-colored or deep yellow oil that may darken after storage.

Soybean is most popularly used as a cooking oil but its uses don’t stop there. Here are some ways soybean oil is used outside of the kitchen:

Soybean oil increases the keratin and amino acids in the hair fibers which help to keep them strong and healthy. This reduces your chances of experiencing hair breakage and balding. It also adds visible shine and instantly improves the appearance of your hair

Using soybean oil topically protects your skin from harmful UV rays and reduces transepidermal water loss by acting as a protective barrier. The linoleic acid, isoflavones, antioxidants, and vitamins found in soybean oil also nourishes the skin, which helps it to look soft and youthful.

Vitamin E in soybean oil can improve the appearance of blemishes and acne scarring. It also promotes the regeneration of new skin cells.

If you are looking for a healthy way to gain weight, soybean oil provides a healthy solution. This is due to the fact that it has high levels of monounsaturated and polyunsaturated fatty acids, along with phytochemicals and vegetable starch which can help to add pounds in a healthier way in comparison to using vegetable oils and butter.

Soybean oil contains adequate amounts of phytosterols which help to eliminate free radicals and increase estrogen productivity. Estrogen is responsible for regulating bone metabolism so increasing its productivity will have a positive impact on bone health and will lower the chances of developing bone diseases such as osteoporosis and osteopenia in women.

High levels of saturated fats lead to the formation of amyloid plaques on the brain cells. This causes them to become inflamed and in turn leads to memory loss. Since soybean oil is rich in Vitamin K, and unsaturated fats (such as linolenic and linoleic acid) and low in the bad saturated fats, it helps to boost memory and learning, and can also treat cognitive, neurodegenerative, and cerebrovascular disorders such as Alzheimer’s.

One tablespoon of soybean oil contains:

Soybean Oil is also a great source of vitamins including Vitamin E, K, and choline.

Vitamin E is a natural antioxidant which helps to protect body cells, boost nervous system function and fight heart disease. It is also great for the hair and skin.

Vitamin K is crucial for blood clotting and bone formation, along with regulating calcium levels in the body.

Choline is a B-vitamin which is necessary for cell membrane structure and the synthesis of the brain chemical, or neurotransmitter, called acetylcholine.

Soybean oil is high in monounsaturated fat and polyunsaturated fat, but low in saturated fat. It is also rich in omega-3 fatty acids which are able to reduce the risk of developing heart disease and osteoporosis.

The unsaturated fatty acids present in this oil are oleic acid, linoleic acid, and alpha-linolenic acid.

Soybean oil has a mild neutral flavor which does not affect the taste of food. It has a light-smell which some people have described as being bean-like.

Soybean oil is loved because:

• It is low in saturated fatty acids- When used in moderation, it helps to keep cholesterol in check and prevent diseases such as diabetes and heart disease.• It is great for the skin- Vitamin E in soybean oil make it a great moisturizing agent, and it can help to brighten and improve the quality of the skin.• It is inexpensive- Soybean oil is one of the cheapest cooking oils available. You can also find it on the shelf of any supermarket.• It has a neutral flavor- Soybean oil has a mild, neutral flavor which makes it perfect for cooking as it will not change the flavor of your food and won’t clash with other flavors when used to make meals.

Soybean oil also has some negative effects. These include:

• It can lead to unwanted weight gain- If you are not trying to gain weight, you should avoid this oil because it is high in calories and fat.• It can contribute to diabetes- Oen study declared that a diet high in soybean oil more harmful to your health than a diet high in fructose or coconut oil. This is because it causes glucose intolerance and insulin resistance which can lead to or worsen diabetes.• You can have an allergic reaction- If you are allergic to members of the Fabaceae/ Leguminosae family, you may suffer a severe allergic reaction.• It is a proinflammatory-If you already suffer from an illness which causes inflammation, consuming soybean oil can worsen your symptoms and increase inflammation.• It can contain trans fat- During the hydrogenation process, trans fat may be introduced into the oil. And even though the oil may say “trans-fat-free”, it is important to note that if the amount of trans fat per serving is half a gram or less, manufacturers may state it as 0g on the label.

Its high smoke point makes it a great choice for deep-frying and stir-frying. It can also be used in baking as an alternative to butter, or as grease for a baking pan.

Soybean oil can even enhance the flavor of salads, sandwich spreads and mayonnaise.

If you have a soy allergy or simply run out of soybean oil when cooking, you can substitute it for canola oil which has a mild taste and a high smoke point.

You could also use sunflower oil, safflower oil, corn oil or peanut oil.

Soybean oil was declared a safe oil for women who are pregnant or nursing. Its fatty acids can even benefit women who are in the gestation phase.

Most vegetable oil is made using soybeans. Additionally, the majority of margarine made in the US contain this oil.

Soybeans are grown on a large scale especially here in the US and in order to produce a high-quality, constant supply of soybeans for producing oil and other byproducts, a large percentage of these crops are genetically modified. Though some experts claim that it is completely safe, others argue that they may have some long-term health effects to humans and the environment.

Soybean oil is prone to oxidation at high temperatures because it is so rich in polyunsaturated fatty acids. Despite having a high smoke point, it is not very heat stable for extended periods and has had negative effects in studies that were conducted on animals.

Soybean oil isn’t the worst cooking oil out there health-wise, but it certainly isn’t the best. Once used in moderation it should be okay, but there are much better alternatives with similar and additional benefits such as olive oil and corn oil.